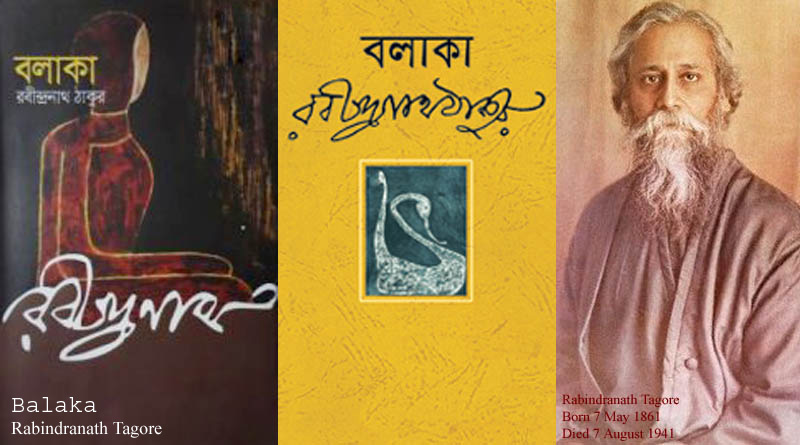 Balaka
A book of poetry on the theme of dynamic consciousness, written by rabindranath tagore in 1916. This poetic work emerged as a part of an evolutionary process of the poetic mind of Rabindranath. In pre-Balaka poetry, the poet’s feelings were expressed through emotions. But in Balaka, those feelings found expression by getting assimilated with the subject and infusing a new awareness through spirit and intellect, knowledge and feeling, mobility and illumination. While writing the book, three things had inspired the poet: the poet’s travel in Europe, the Nobel Prize, and contemporary global situation and the First World War. The poet left for Europe, for the third time, on 11 May 1912. He went to the USA after staying in England for four months. He came in contact with eminent personalities, common people and university scholars at places like New York, Urbana-Champaign, Chicago, Boston, Cambridge, etc. The new flow of life in Europe and America, its exuberance and internal spiritual strength, and the views of the American people on science, state and society created a great stir in his mind and consciousness. As a result a deep-seated inspiration and insight generated in the poet’s mind alongside. Secondly, the poet was infused with a new force of ‘prana’ from the realisation that the importance of oriental lifestyle, its glory at global level and proper evaluation by great people of the world were reflected through his winning the Nobel Prize. The third element was contemporary global situation and the First World War. Besides, the poet thought ‘ ‘We have arrived at a critical juncture of human race, a bygone night is on the verge of conclusion. A new blood-drenched sun of a new age is imminent through death, sorrow and pains. There were therefore unfounded anxieties inside the mind.’
Balaka consist of 45 poems; among them, 10 were of equal lines and 1 was a sonnet. The remaining 34 poems were of the ‘Bishama’ poetical metre and the metres of all these poems are called ‘Balaka’s metre’. The topics which the poet presented in this work; a. state of nature and universal nature; b. The poems ‘Chavchala’ and ‘Balaka’ depicts’ the dynamic consciousness of the poet regarding universal nature, and the poem ‘Jharer Kheya’ displays the state of nature which fosters the poets revolutionary consciousness; c. The 26th and 41st poem depict the state of nature; of them, the 26th one is the principal one; d. the poet felt nature as in an unadulterated state up to a limited extent; it was rather sensed as a supplement to some other emotion, or a dynamic consciousness, or as an expression of the universal or astrophysical consciousness.
The life-consciousness of the poet is forever changing with regard to emotions and forms. All the poems in the book of poetry under discussion embodied a distinct message separately; the gist of some poems relate to ‘welcoming the young’ (no. 1), some give prediction about a catastrophic world-war (no. 2), some depict the beauty of individual love (no. 6), while some indicate the great passing away of the liberated soul through rebirths (no. 7); in some, praise was showered on universal dynamism (no. 8); a call was made in a poem for revolution in order to break free from the shackles of the state (no. 37), a bouquet of love was placed at the altar of God by the poet as a representative of man in one poem and another contains reminiscences about the youth gone bye. Apparently, the poems are diverse and distinct; but overall, it embodies a common theme, which can be compared to the flight of the cranes (Balaka). Each poem is a separate crane and carries the message of mobility in an overall sense. For this reason, the naming of ‘Balaka’ is justified. It not only expresses the theory of mobility, it also radiates unprecedented beauty. Apart from its aesthetic beauty and mobility-consciousness, it also demonstrates the poet’s philosophy of death and art.
The strokes of ‘Balaka’ crosses all borders, strikes at all kinds of stationary states with the joy of mobility and occasionally flows in long currents, sometimes becoming free after delinking from the connected line, and sometimes creating waves of rhythms by getting connected with the next line by the force of emotion. Some lines become divided with the joy of freedom, and in some lines a singe word creates a line with a distinct emotion. This kind of unequal poetic metres is a feature of Balaka. The following is a stanza (translated into English from the original in Bangla) showing variations in lines:
Oh mighty river,
Your water is invisible, quiet
Unbreakable, continuous
Flowing ceaselessly.
In the thrill of pulsation you move in shapeless fury
Vigorously hit by the naked flow
Heaps of foams rise up;
The dazzling rays of light are reflected in the currents
From the fleeing darkness;
Revolving repeatedly in eddies
Layers after layers
The sun, moon and stars
Rise like bubbles [No. 8 poem]
While explaining the characteristics of this poetic metre, some have termed it as ‘muktak’ or ‘muktabandha’ because of its free nature. Again, some view it as a unique variation of blank verse executed by Rabindranath. In Western literature, this widely used metre is called ‘free-verse’ or ‘verse-libre’.
The language of this poetry is sharp, illumined, stimulated, poignant and bright. Its format assumed a distinct shape because of the mobility of the poetic metres, consolidation of language and new message. An outstanding feature of this format is to sharpen the message through opposites. For example ‘ In deathless gorgeous attire of mundane death/The moment you are full nothing remains then/I pierce the heart of death if the nectar is not found’. This book of poetry by Rabindranath has assumed a distinctive shape, because of its scientific/philosophic dynamism, especially the consciousness of Upanishads and its confluence with humanism, which takes the side of the exploited and repressed people of the world.
-Shamima Akhter
Source: banglapedia