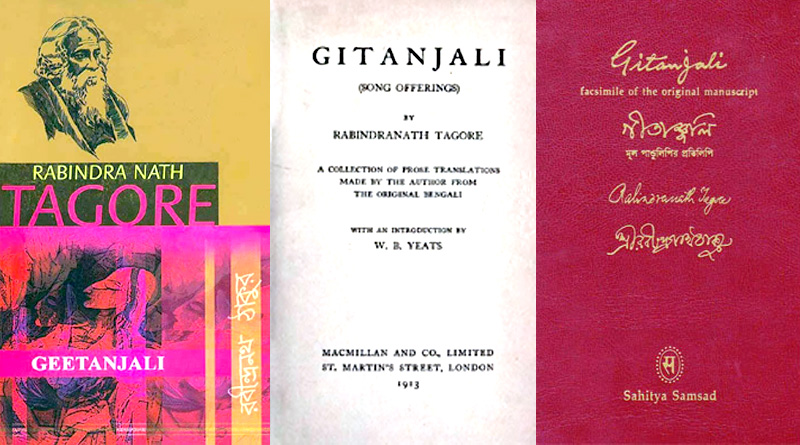 Geetanjali
Geetanjali is a remarkable book of verses composed by rabindranath tagore (1861-1941), which earned him the Nobel Prize. It was written originally in Bangla during 1908-1909 and later its English version in prose was published under the title ‘The Song offerings’. It was the first English anthology of Rabindranath published in late 1912 by the India Society of London. On 10 November of the following Year (1913), Rabindranath Tagore was awarded the Nobel Prize for Literature for the book Geetanjali. This recognition introduced Rabindranath worldwide as an exponent of unique poetic talent. Famous Irish poet W B Yeats wrote the introduction of the English version of Geetanjali. Besides, a pencil sketch of the poet drawn by Rothenstain was published in the book. Rabindranath dedicated Geetanjali to WB Yeats.
In late 1912, Rabindranath was scheduled to go to London by ship. But on the eve of the voyage, he became sick following the attack of piles. He left kolkata for taking rest on board a boat on the river Padma. While taking rest there, the idea of translating Geetanjali into English came into his mind. Rabindranath himself then started translation of the book with a view to exposing his poems to the readers of the English speaking world.
Rabindranath Tagore, on his poetical works-Naibedya, Utsargo, Kheya and Geetanjali said- ‘I fill in love with this world. I have bowed my head down to the Great (Creator of the universe), I have sought freedom to Him through self dedication. I believe that he exists in the hearts of great people belonging to the earthly human race. I have tried to sacrifice my best creations as offerings, which I achieved by dint of arduous endeavor of literary pursuit from my childhood. Whenever I experienced external resistance against the offering, my heart overwhelmed with his grace.’
Rabindranath himself did not translate all the poems and lyrics of Geetanjali. Others who did this job were Brothers James and Joe Winter, a British poet and translator. Rabindranath was flawless in translating his own poems as he did not translate those literally. Rather the English version of his own poems was more than thematic translation. He often abridged the poetries for expressing ideas and inner meaning without disrupting the substances. This translated anthology had literary arena particularly in the west about Bangla language. As a result, the poetic talent of Rabindranath Tagore acclaimed global recognition.
The Swedish Academy in its citation for the Nobel Literature Prize Said, ‘Rabindranath is being awarded the Nobel Prize in recognition of his deep emotional emphatic and beautiful poems as his poetic ideas and conceptions have been infused in the western literature through his own highly accomplished English translation.’
Geetanjali contains 103 Poems and lyrics, of which only 53 were translated from the original Bangla Geetanjali having 175 poems and lyrics. The rest of 50 lyrics and poems were selected for the English version of Geetanjali from nine different books of verse composed by Rabindranath published earlier; 16 lyrics were taken from Gitimalya, 15 from Naibedya, 11 poems from Kheya, 3 from Shishu and 1 each from Kalpana, Chaitali, Utsargo, Swaran and Achalaytan (a drama). Gitimalya, a collection of lyrics composed by Rabindranath is regarded as the sacred garland of music in his matured life. The poet in this collection expressed his total dedication to God in different words and forms. A poem, ‘Chitta Jetha Voi Shunnya’ (where the mind possesses no fear) included in Naibedya expresses the poet’s broadness and fearlessness of mind and his knowledge driven logics. In lyric of Achalaytan ‘Alo Amar Alo’ (Light, my light) the blessings of nature were awakened with the rays of sun in every step of life. The poet expressed the theme against all darkness through the beating of heart and strokes of vina (musical instrument). The context of drama, Achalaytan, deals with the state of acquiring of knowledge. It says that knowledge gathered in a closed situation is lifeless and poor. But when the barriers are removed, rays and joy enter into the mind, the knowledge acquired at that stage become perfect.
-Shamima Akhter
Source: banglapedia