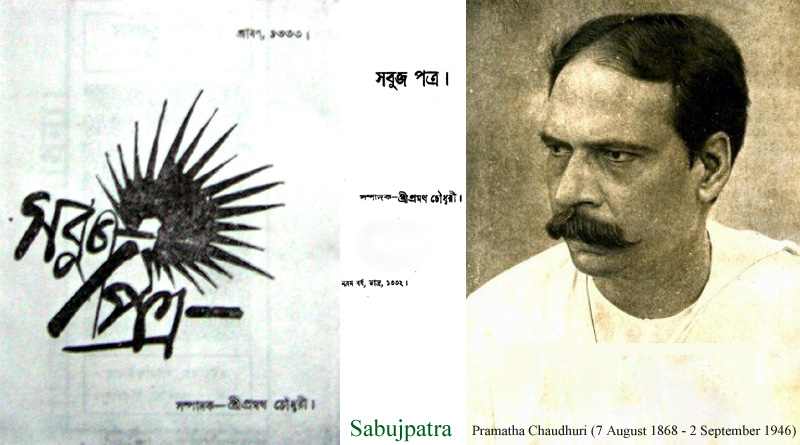 Sabujpatra
Sabujpatra was first published on 25th Baishakh 1321 BS (1914) and edited by pramatha chowdhury (1868-1946). rabindranath tagore inspired him to publish such a journal. The only colour used in it was sabuj (green). A green palmleaf drawn by Nandalal Bose was its cover illustration. No picture was ever published in Sabujpatra, and no advertisement. Pramatha Choudhury made no attempt to present the journal in a commercially attractive get-up. At the same time, he was stringent to the utmost about the ideals and literary standard of the journal. So, Sabujpatra was not to be much popular among general readers and writers. In the first phase it continued up to 1329 BS (1922). Its second phase started in 1332 BS. The journal finally folded in 1334 BS (1927).
Though short-lived, Sabujpatra was a major force in shaping Bangla language and literary style for the post-First World War generation. Pramatha Choudhury tried to introduce new literary ideals, preferred spoken Bangla to the written and a new style of writing, often called ‘Birbali’, after his pseudonym ‘Birbal’. He succeeded through this paper in introducing chalita Bangla for literary exercise. Henceforth the chalita bhasa have been ruling the Bangla language style. Rabindranath’s later prose works and modern Bangla literature attest the success of the motto of the Sabujpatra.
The first issue of Sabujpatra contained writings from Rabindranath Tagore, satyendranath dutta and the editor himself. The Sabujpatra tried to create a new group of writers. Some of the intellectuals who gathered around Pramatha Chowdhury became literary luminaries later. dhurjatiprasad mukhopadhyay, atul chandra gupta, Barada Charan Gupta, suniti kumar chatterji, Kiranshankar Roy wrote articles in Sabujpatra; Kanti Chandra Ghosh, Amiya Chakraborty and Suresh Chakraborty contributed poems. In everything it published, Sabujpatra expressed the spirit of freethinking and advocated rationalism, democracy and individual freedom.
-Indrajit Chaudhuri
Source: banglapedia