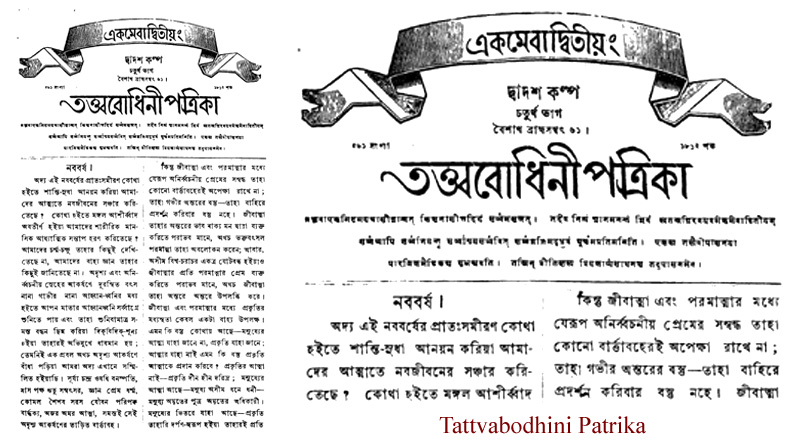 Tattvabodhini Patrika
Tattvabodhini Patrika’ organ of Tattvabodhini Sabha of the brahma samaj. The journal was first published on 16 August 1843 from Calcutta to propagate the Brahma faith and to enable regular contact among members of Tattvabodhini Sabha. akshay kumar datta was its editor, and debendranath tagore was charged with its overall supervision. The best-known prose writers of the 19th century-iswar chandra vidyasagar, rajnarayan basu, dwijendranath tagore contributed regularly to the journal, spawning a new epoch in bangla language and literature. All its contributors and patrons were reformists. Although propagation of religious matters was its primary objective, the journal also published valuable articles on general knowledge and science, history, literature, religions, politics, economics, sociology and philosophy. It used to print pieces urging Bengalis to venture out into international trade and equip themselves adequately for political independence. In this way the journal made significant contributions towards developing Bangali culture and civilization.
Tattvabodhini Patrika played a key role in the propagation of Brahmaism in Eastern Bengal. Brajasunder Mitra, initiator of the Brahma Samaj in Dhaka, was attracted to this faith by reading the journal. Considering the poor communication system of the time and dearth of workers, the journal played a large role in the work of the samaj.
Debendranath wished to limit the journal to purely religious matters, but the view of Akshay Kumar, who wanted to broaden its scope to scientific essays prevailed. Because of Akshay Kumar’s editorship, the journal was able to enhance the prestige of Bangla journalism. Even intellectuals with western education who would rather not read Bangla newspapers were attracted to Tattvabodhini because of the depth of its coverage and quality printing. Articles that appeared in the journal were chosen by a committee consisting of Iswar Chandra Vidyasagar, Rajendralal Mitra, Debendranath Tagore, Rajnarayan Basu, Anandakrishna Basu, Sridhar Nyayaratna, Anandachandra Vedantavagish, Prasannakumar Sarbadhikari, Radhaprasad Roy, Shyamacharan Mukherjee, Akshay Kumar Datta and others. Radhaprasad Roy, son of rammohun roy, who was a member of the committee, gave the journal a printing press as gift. In 1859 the Tattvabodhini Sabha closed down and the journal committee was then dissolved. Subsequently, running the journal became the responsibility of the Calcutta Brahma Samaj.
Tattvabodhini Patrika was published up to 1932. After Akshay Kumar, it was edited at different times by Nabinchandra Banerjee, satyendranath tagore, Ayodhyanath Pakrashi, Hemchandra Vidyaratna, Dwijendranath Tagore, rabindranath tagore and Kshitindranath Tagore.
-Samaresh Devnath
Source: banglapedia